In modern animal production a wide range of different raw materials are used to formulate pig diets and feed evaluation systems will estimate the nutritional composition of the diet based on the individual characteristics of each raw material.

However, the real nutritional value of a diet also depends on the interactions between individual nutrients. For instance, research has shown that starch digestion can affect the utilisation of protein (the portal flux of essential amino acids is higher for pigs fed diets rich in slow digestible starch when compared with diets rich in rapid digestible starch).

Research also shows that the presence of starch in the large intestine, namely resistant starch, can influence the degradation of fibre. It alters microbial populations' activity and the endogenous enzymes profile resulting in a reduction of total tract digestibility of fibre and delays in its fermentation.

Additionally, pig performance is affected by the rate of nutrient absorption, which is a combination of the rate of hydrolysis and digesta transport through the gastro-intestinal tract.

Moreover, digesta transport depends on the composition and properties of the digesta. Typically, digesta is a complex suspension of particles changing continuously along the flow through the gastro-intestinal tract but the soluble and insoluble fractions of whole digesta travel at different speeds.

Under the complexity of the digestive process and all the nutrient interactions, nutritional tools with a clear role in improving nutrient digestibility are key to achieve optimal animal performance and cost effective production.

Critical role in the release of nutrients

Non Starch Polysaccharide degrading enzymes (NSPases) play a critical role in the release of nutrients and energy to be used by the animal. Their influence on the digestive process (viscosity, transit time, microflora) alongside the hydrolysis of soluble and insoluble fibre has a proven positive result in pigs' zootechnical performance and has been demonstrated.

Despite the animal response to a NSPase variation due to animal health status, gut microflora, production conditions, soluble and insoluble NSP content in the diet, etc, the NSPase will influence the digestive processes by increasing digestibility of NSP in the small intestine, by formation of a specific combination of oligosaccharides, which will be available for fermentation by the microbial gut flora in the large intestine and the viscosity by changing the digesta transport (speed). 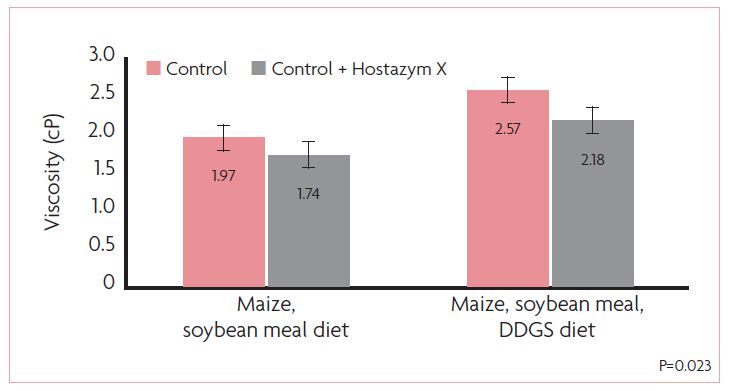 Figure 1. Effect of Hostazym® X on the ileal content viscosity of piglets

To understand the effects of Hostazym® X (an enzymatic complex targeting fibre degradation) on pig performance, beyond its proven positive effect in increasing nutrient digestibility and consequently pig performance, Huvepharma® set a series of research trials designed to measure ileal viscosity effects, total tract digestibility of soluble and insoluble NSPs, intestinal integrity and inflammatory response by the use of Hostazym® X compared with a blank control treatment.

The results in Figures 1, 2 and 3 show that Hostazym® X significantly decreases ileal viscosity influencing the digesta flow, has an action on total tract digestibility of both soluble and insoluble NSPs supporting better nutrient digestibility, and positively influences intestinal integrity along with a reduction in inflammatory response factors (TNF-alpha) at plasma level. 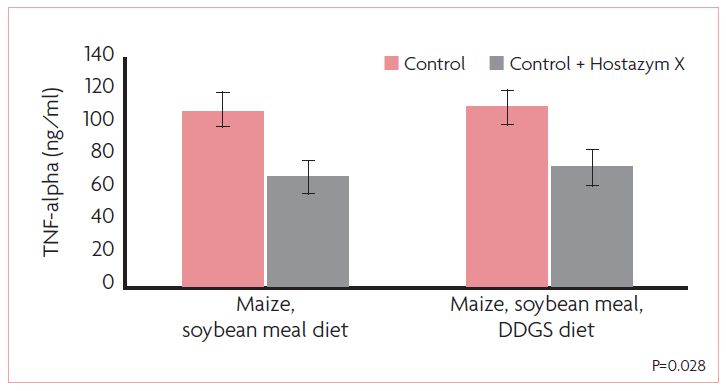 All these significant effects support the animal and a healthier gut environment and contribute to an overall better zootechnical performance.