Effect of Hostazym® X on Mortality in Growing-Finishing Pigs

The effect of Hostazym® X on the growth performance of pigs is well documented as summarized in Figure 1 below. However, non-starch polysaccharide (NSP) degrading enzymes are also expected to improve the overall gut health status of pigs. 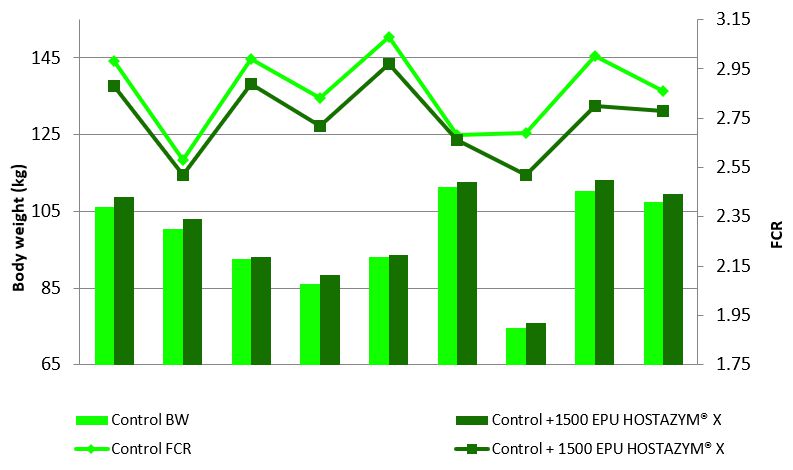 When NSP degrading enzymes hydrolyse NSPs, arabinoxylan-oligosaccharides (AXOS) are formed. The AXOS act as a prebiotic as they are preferentially fermented into highly absorbable short-chain fatty acids (SCFA) by the bacterial gut flora. This prebiotic effect induces several positive effects such as a drop in pH and the alteration of the microflora composition in the hindgut of the pig, which results in a healthier gut environment and a better health status for the pig.

As already demonstrated and published by Huvepharma®, the extra effect of Hostazym® X over performance benefits can be measured through its impact on mortality. Table 1 summarizes the results of four trials where the link between boosted gut health and reduced mortality was identified (in addition to the extra performance benefits).

These results demonstrate that:

In addition to what has already been published, further investigations into the influence of Hostazym® X on mortality continued under field conditions. Customer reports from an additional 15 studies (Table 2) where mortality and culled and removed pigs were recorded showed: 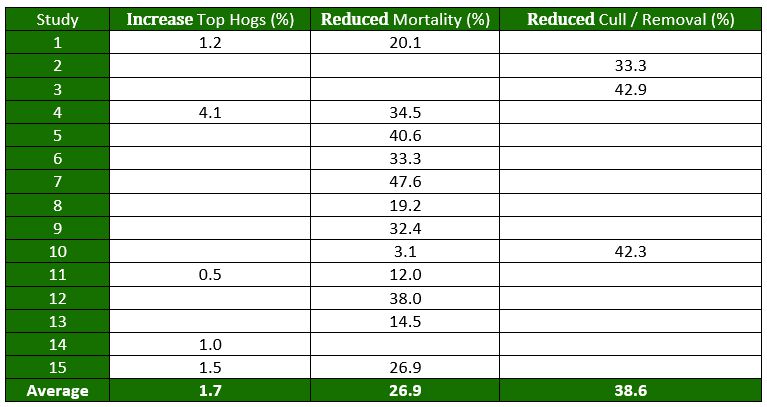 Table 2. Increase in top hogs, and reduction in mortality, cull and removal percentages from 15 studies (Hostazym® X added to the diet at 1,500 EPU/kg feed)

The economic impact of the improved mortality and reduced removals can be estimated at around €1,000 per 1,000 pigs placed in addition to the economic benefit of extra performance. (Economical calculation assuming a meat price of €1.40/kg and a slaughter weight of 115 kg. The extra financial gain is due to a reduction in mortality by 25% when Hostazym® X is fed at 1,500 EPU/kg feed).