The Hindgut and Its Bacteria: Important Key Players in Modern Animal Production

As understanding of the microbiota grows, so does interest in developing tools to positively influence the microbiota. Probiotics are one example of such a tool, playing an active role to support and improve the existing microbiota.

However, the importance and characteristics of different segments of the gastrointestinal tract (GIT) are sometimes ignored, as are the corresponding microbiota at those different locations. Doing so neglects the fact that certain probiotics might be better adapted to support specific locations. To explain this further, the hindgut will be examined: the distal part of the GIT in home to bacteria affecting immunity, gut health and overall production efficacy.

In a normal situation, the hindgut is heavily populated by bacteria from the Clostridium IV and XIVa clusters. These bacteria produce multiple metabolites, including butyrate: an important short-chain fatty acid (SCFA) with a multifactorial function. It can be used as a primary source for energy production in coloncytes, as well as acting as a cellular mediator, regulating multiple processes in the gut and beyond (Figure 1). This includes gene expression, cell differentiation, gut tissue development, oxidative stress reduction and immune modulation (Bedford and Gong, 2017); Guo et al., 2020), highlighting the importance of butyrate in the hindgut. 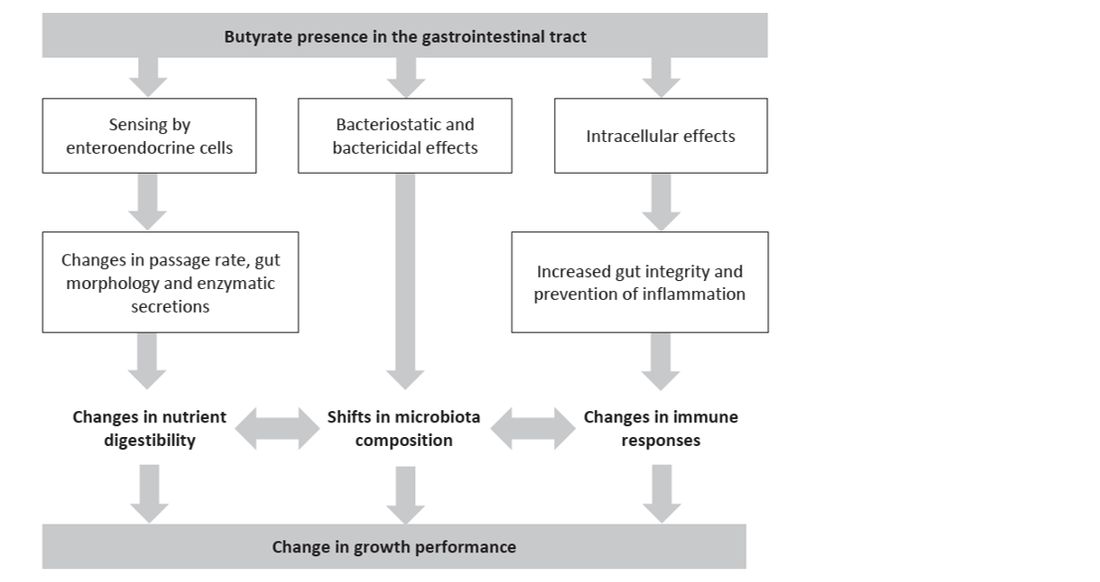 However, making sure that there is sufficient butyrate at this location is not always straightforward, as the microbiota can be heavily influenced by several parameters during production. As a consequence, butyric acid-producing bacteria can rapidly diminish when the animal comes under stress. Apart from disrupting the natural processes, the absence of butyrate also forms an indirect competitive advantage for multiple opportunisitc pathogens. An example of this has recently been described by Rivera-Chávez et al. (2016) for Salmonella and shows how the absence of butyrate leads to colonocytes utilizing glucose as the starting molecule in their energy production (Figure 2). In itself, this is not a massive challenge, as glucose is a good source for producing energy. However, an energy production process based on glucose does not require oxygen.

Consequently, epithelial oxygenation increases, resulting in more oxygen becoming available in the gut lumen. It is this oxygen that can then be used by certain opportunistic pathogens such as Salmonella, resulting in accelerated proliferation and consequently a threat to production standards. This is not the only way opportunitistic pathogens can benefit from the absence of butyrate, but it shows how the SCFA impacts fundamental metabolic processes, further highlighting its importance. 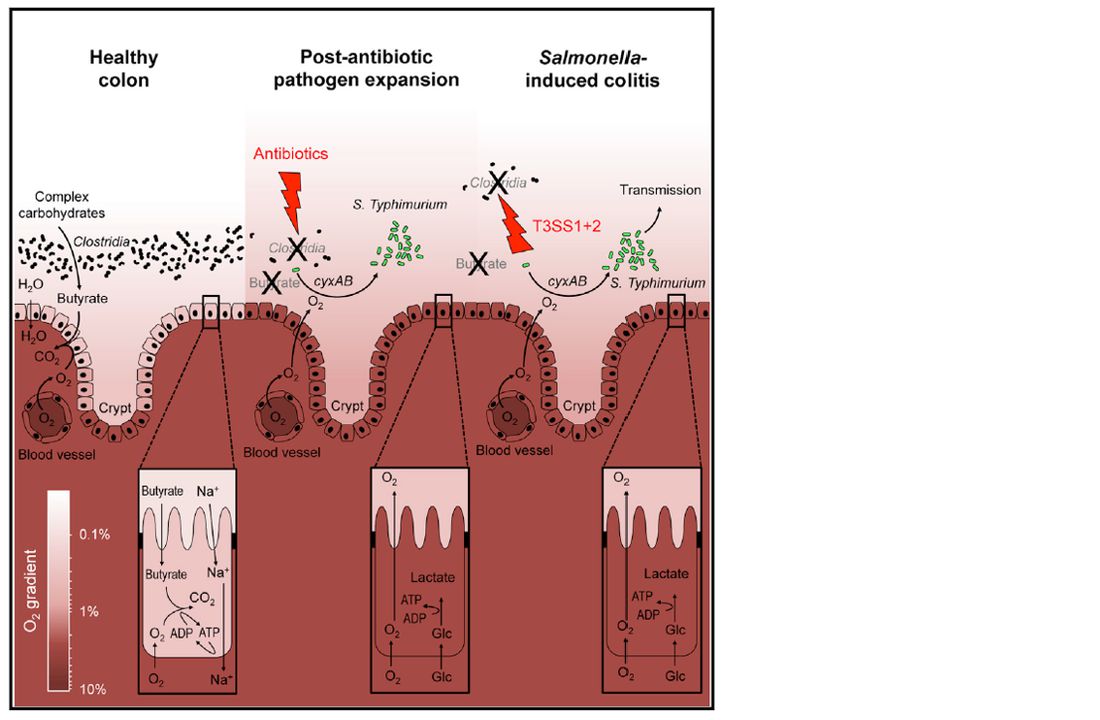 Figure 2. Changes in energy production in the absence of butyrate can lead to accelerated Salmonella proliferation, as oxygen becomes more available in the lumen (Rivera-Chávez et al. 2016)

To counter these effects and make up for the loss in local butyric acid production, supplementing butyrate directly via the feed can provide some relief. However, research has indicated that regardless of which type of butyrate is supplemented, it usually does not reach the distal stages of the GIT (Moquet, 2018). Although these butyrate additives are useful in their own regard, their benefits are drawn from acting on different processes at different locations, and not from the hindgut. This is where Miya-Gold® / Top Gut® comes into play, as the probiotic's characteristics make it well-equipped for the task.

First, the probiotic strain of Clostridium butyricum used is capable of producing significant amounts of butyric acid, thus supplementing the animal with the SCFA where needed (Svejstil et al., 2019). Secondly, the C. butyricum strain is a spore former. A spore is a metabolically inactive form of the vegetative bacterial cell, formed when the environmental conditions are unfavourable to the survival of the bacteria. A spore is extremely robust, so in this form the probiotic can pass through the more hostile environment in the initial stages of the GIT, without loss of viability. Once the spore reaches the right location in the distal GIT, the spores germinate and yield active, vegetative cells. Consequently, butyrate becomes available again at the location where it is most useful, efficiently supporting the animal during the period of challenge. As a logical outcome, C. butyricum has been shown to consistently improve growth performance in numerous research studies, as well as under commercial conditions.

Over the years, the importance of the commensal microbiota has been recognized and consequently researched in-depth. There is still a lot of ground to cover, but it has become indisputably clear that the microbiota should be seen as a key factor in animal health. Understanding how it reacts to challenges, and managing these changes accordingly, offers a way of unlocking previously missed potential. As a result, animal production can be elevated to the next level.

Clostridium butyricum in the Field: Securing Gut Health at Weaning