Supporting Laying Hens With the Most Efficient Vitamin D Supplement

Eggs are an easy source of high-quality protein, vitamins and minerals, and are as such correctly regarded as an important foodstuff. Additionally, eggs are one of the most widely available and easily affordable animal products.

To meet demand, there has been a move towards a longer laying period for hens, with a focus on maintaining egg quality in the later stages of lay. This has partially been achieved by genetic selection for traits such as egg persistency and eggshell quality. As a result, current production cycles have already been extended to more than 85 weeks of age. However, diet strategies need to be adapted to these longer periods of lay, as the impact on the animal's nutritional requirements should not be underestimated.

As the current focus has been on extending the production period up to 100 weeks, it is possible to calculate the nutritional demand of the bird that corresponds to the predicted quantity of eggs produced. Over those 100 weeks, a standard hen would produce up to 26 kilograms of eggs, or 14-times the hen's bodyweight. This equates to approximately 3 kilograms of eggshell, or more than 1 kilogram of calcium, as eggshell consists of 96% calcium carbonate and 4% organic matrix on average. Therefore, each egg requires approximately 2 - 2.5 grams of calcium for its shell. This requirement challenges the calcium metabolism and homeostasis in laying hens severely, and explains why lower shell quality is currently the main reason for terminating a layer flock.

To satisfy this calcium requirement, calcium provision relies heavily on intestinal absorption from the feed. The skeleton acts as a secondary source of calcium during the dark hours of the day, when intestinal absorption has ceased. The interaction between these two mechanisms is regulated by the metabolized form of vitamin D3: managing this vitamin D regulation mechanism is an option to influence calcium uptake, and thus eggshell quality. 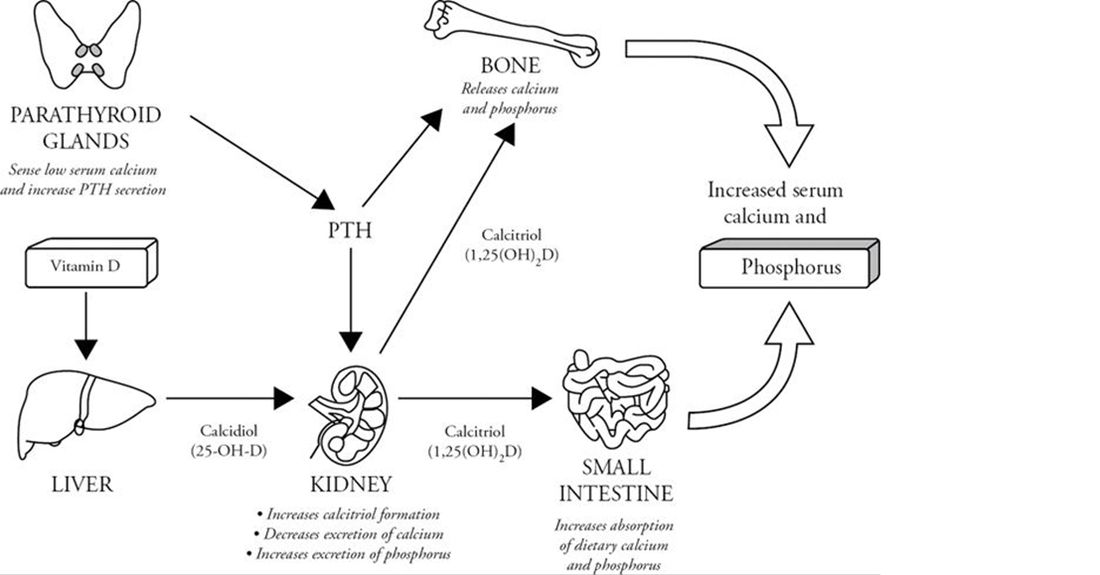 Vitamin D3 itself is initially taken up from the intestine in association with fats, requiring the presence of bile salts for absorption. It then undergoes a first hydroxylation in the liver, forming 25-hydroxyvitamin D3. A second hydroxylation in the kidneys transforms 25-hydroxyvitamin D3 to 1,25-dihydroxyvitamin D3, yielding the active form of vitamin D. This metabolite is considered a hormone and regulates the intestinal absorption of calcium, bone homeostasis, calcium release from bone and the reabsorption of the mineral in the kidneys.

However, the metabolic pathway of vitamin D depends on the efficiency and health of the liver: without proper liver function, 25-hydroxyvitamin D3 cannot be produced in sufficient quantities. An example of a factor leading to inadequate 25-hydroxyvitamin D3 is fatty liver syndrome, frequently seen in aged birds. The evident risk is that a 1,25-dihydroxyvitamin D3 deficiency develops, derailing proper calcium regulation, even before the first precursor of the final active vitamin D metabolite is formed.

Partly replacing vitamin D3 with Bio D® decreased the number of broken eggs, as eggshell strength was improved. At the same time, bone strength increased parallel with shell quality, securing the animal's welfare. These results indicate the value of supplementing Bio D® directly into the feed, both in terms of positively impacting eggshell quality as well as improving bone mineralisation.

Keeping in mind the layer industry's goal of extending laying cycles with minimal loss of egg quality, it is clear that dietary 25-hydroxyvitamin D3 should play a key role in the future. Choosing Bio D® as the preferred 25-hydroxyvitamin D3 option makes sense, as its unique production process gives it distinct advantages in terms of stability and bioavailability. Combined with its efficacy, as recorded in the study described above, Bio D® helps producers to fulfill the vitamin D requirements of their animals, providing effective nutritional support from start to finish.

Probiotics As A Tool To Support Optimal Production

Registration Of A New Anticoccidial in Europe

Assessing the Benefits of Bio D® via Aviapp®