Ascaris suum is by far the most important nematode in modern pig husbandry worldwide. The enormous impact of this endoparasite on different technical parameters and the farm profitability is determined by the typical characteristics of its lifecycle. A thorough understanding of this unique and complex lifecycle is required for the successful implementation of a strategic deworming program.

Adult stages are often not observed on farm, but they are frequently found at slaughter or when performing necropsies. Clinical symptoms caused by Ascaris suum are mostly vague and unspecific and pigs infected with a large number of worms normally appear clinically healthy.

The adult worms are 30-40cm long and the female worms excrete up to 200,000 eggs per day. This massive and intermittent excretion leads to a quickly emerging and high infection pressure in the pig pens and the surroundings.

Cleaning and disinfection will never eliminate all the eggs present in the faeces. The eggs have a thick and sticky outer coating and can survive for more than five years in the surroundings. To become infectious, an embryonating phase takes place in the environment and the intensity of this development largely depends on the humidity and temperature.

The maturation to infectivity is temperature dependent, not occurring below 15oC but as quickly as less than 14 days at 30oC. This explains the seasonal variations in the presence of white liver spots in slaughterhouses. Condemned livers are mostly observed during late summer and autumn.

Faecal egg counts (number of eggs per gram of faeces) is a popular diagnostic tool but difficult to interpret correctly. The build-up of immunity against migrating larvae gives the opposite diagnostic evidence. This paradox further aggravates the technical performance losses and pig health issues to a larger extent than expected at first sight. Therefore, egg counting is not a valuable tool to measure the total exposure to worm infections.

To reduce egg transmission, particular attention must be paid to helminth control in group housing, outdoor or straw bedded production systems, which are expanding in response to increasing consumer demand for free range pork production. After intake of the embryonated eggs and hatching in the caecum and upper colon, the larvae start to migrate. Not more than 1-2 days later, migrating larvae arrive in the liver via the blood circulation.

The subsequent hepatitis and lymphoid infiltrations provoke typical white spots (also called milk spots) on the liver. Sometimes 20-30% of the livers at slaughter show these typical spots. Unfortunately, the findings of the presence of white spots on the livers and adult worms in the small intestines at slaughter are not always reported to the farm management. Affected livers are totally or partially rejected for further consumption and these costs may be charged to the producers.

Observing these white spots at slaughter is a clear proof of the presence of A. suum worms and logically, can be a diagnostic tool. However, these white liver spots fade rapidly with time and heal shortly after last passage. Observing white spots only indicates a recent larval migration within the last 5-6 weeks but does not give a good prediction of the total infection pressure in that specific group of pigs.

The absence of white spots at slaughter does not exclude pigs that might have been highly infected previously, when livers were infected at an early age but healed in the meantime. Thus, the diagnosis is often a false negative and, as a result, the prevalence of worm infections is frequently underestimated.

Thereafter, the larvae gain entry to the blood stream and arrive in the lungs 4-5 days after infection. Several other respiratory pathogens take advantage of the initial tissue damage caused by the migrating larvae.

The migration through the lungs induces frequent coughing. As a result, the larvae arrive in the pharynx and are swallowed. Not more than two weeks after intake, the larval stages can be found in the small intestines. Not all intestinal larvae develop to adult worms. A self-cure reaction between 14 and 21 days after infection eliminates lots of larvae from the small intestines by increased gut movement and subsequent intestinal expulsion.

However, more developed larvae counter this expulsion mechanism and are able to grow into adult worms and start to reproduce again. The presence of larval stages and adult worms in the intestinal tract is also considered to be a predisposing factor for important intestinal diseases like ileitis and Brachyspira infections.

The total interval between the intake of embryonated eggs from the environment and the re-excretion of new eggs (prepatent period) is six weeks. This interval is the basis for an adequate deworming programme. The total degree of exposure to worm infections during the whole fattening period can be reflected by a serodiagnostic test at the end of the fattening period. This test is based on the determination of antibodies against A. suum haemoglobin.

Controlling worms is part of good farm management and contributes to an optimal general health status. Strategic deworming lowers the feed conversion rate to a large extent. As feed costs represent more than 70% of the total production cost of a pig, this parameter has an enormous impact on revenues. Furthermore, a higher average daily weight gain is noted, which increases the number of pigs brought to slaughter by a faster rotation of batches.

When properly applying a strategic deworming programme, more pig carcases are classified in the higher lean meat classes, in turn resulting in added value. A deworming strategy reduces the frequency and cost of antimicrobial treatments. When comparing data before and after the implementation of strategic deworming, a reduction in mortality rates and number of dropouts is noted. Moreover, worm infections impair the immune response of pigs after infection with other pathogens and reduce vaccine efficacy.

Figure 1. Sero-conversion 2-8 weeks after M. hyopneumoniae vaccination in pigs with or without coinfection with A. suum (Steenhard et al., 2009)

When challenged, vaccinated pigs infected with A. suum showed three times more severe lung pathology compared to vaccinated pigs without worm exposure (Figure 2). The economic benefit of a strategic deworming programme is estimated to be up to €9 per fattening pig.

Repeated treatments batch after batch are needed to lower the infection pressure in fattening units. Optimal results can only be achieved with molecules active against all different helminth stages (eggs, intestinal and migrating larval stages and adult worms).

Fenbendazole (Pigfen® from Huvepharma®) has a complete spectrum of activity at a total dose of 5mg/kg body weight. Deworming fattening pigs with fenbendazole every six weeks covers the prepatent period described above and ensures the highest efficacy, if continued over consecutive fattening rounds.

The interval between consecutive anthelmintic treatments depends on the spectrum of activity. Some other active compounds do not interrupt all infectious stages in pigs and as a result, should be administered more frequently. The situation in sows is different because of partial immunity after infection. Therefore, the suggested interval for treatment of sows is three months. Deworming sows largely reduces the horizontal transmission of eggs to their progeny in the farrowing houses and this practice is a must to reduce the infection level in fattening herds.

To ensure maximal efficacy, safety and ease of use, two innovative formulations of Pigfen® have been developed.

Most anthelmintic premixes and oral granules are typically formulated as standard powders, in which the active ingredient is simply mixed with a carrier such as lactose. Pigfen® 40mg/g fenbendazole is different and unique in this aspect because its active substance is encapsulated in larger and equally sized microgranules (Figure 3). 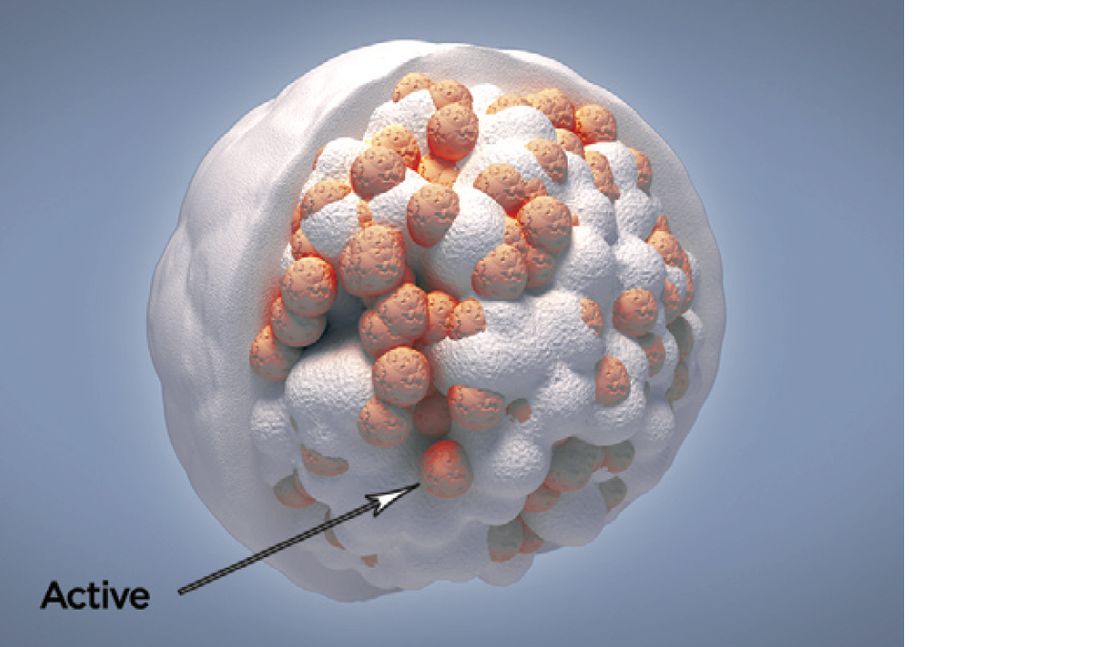 In nature, benzimidazoles like fenbendazole and flubendazole are poorly water soluble. However, Pigfen® 200mg/ml fenbendazole Oral Suspension is developed by a unique nanosuspension technology which significantly facilitates the administration in the drinking water. This innovative technology results in ease of use and a much shorter preparation time compared to other suspensions or emulsions.

Furthermore, the perfect homogeneity in the drinking water without any risk of sedimentation ensures maximal efficacy (Figure 4).

Figure 4. The ease of use of Pigfen® nanosuspension (left) versus another benzimidazole containing product (right)

Worm infections are omnipresent and have an enormous impact on pigs' technical performance and health status. Clinical symptoms at farm level are often vague and unspecific. The paradox in the diagnosis of Ascaris suum infections means that diagnostic tools should be interpreted correctly.

A strategic deworming programme every six weeks over consecutive rounds is a basic principle for good farm management and is a must on every farm. Pigfen® at a total dose of 5mg fenbendazole/kg bodyweight in the feed or drinking water ensures optimal efficacy, safety and ease of use.

Eradication of Swine Dysentery via Biosecurity and Medication