Monimax® is a new product that combines the strengths of the synthetic compound nicarbazin with the ionophore monensin, resulting in a unique new product for coccidiosis control.

The different modes of action of monensin and nicarbazin work synergistically, resulting in a high performing product that gives optimal efficacy.

An anticoccidial sensitivity test (AST) has demonstrated this synergistic effect between nicarbazin and monensin: the combination of both products performed better than the products individually.

Although Monimax® is a new product, the active compounds have been on the market for many years, so development of resistance is a legitimate concern. Recent feedback from the field suggests reduced efficacy of the frequently used nicarbazin/narasin combination product currently on the market.

For this reason, a meta-analysis was performed to evaluate the effectiveness of Monimax® against recent Eimeria field strains in comparison to a nicarbazin/narasin product. The meta-analysis was performed using the data from 27 different ASTs conducted over a 7-year period (2013-2019). The Eimeria isolates were collected from commercial farms from 13 different countries with different anticoccidial control programs.

The sensitivity trials were conducted in two different research institutes, using a comparible, standardized AST protocol (Figure 2). In short, groups of cage-reared birds were supplemented with Monimax® or nicarbazin/narasin starting 2 days before oral inoculation with different Eimeria field strains. Approximately 6 days after inoculation, the severity of lesion scores (according to Johnson and Reid, 1970) and other performance parameter measurements were collected and compared to an uninfected, untreated control group (UUC), and an infected, untreated control group (IUC). All coccidiostats were used at their current registered European dosages.

Figure 2. The standardized protocol for an AST

Average daily gain (ADG), average daily feed intake (ADI) and feed conversion ratio (FCR) were collected over the course of one week and compared in a meta-analysis from 27 standardized sensitivity trials (Table 2). The in-feed application of Monimax® was compared to both control groups and to the inclusion of a nicarbazin/narasin combination product.

Table 2. The different performance parameters in comparison with both control groups

Lesion scores were determined according to the Johnson and Reid (1970) scoring system. The least square mean (LSM) per Eimeria species is shown in Table 3. 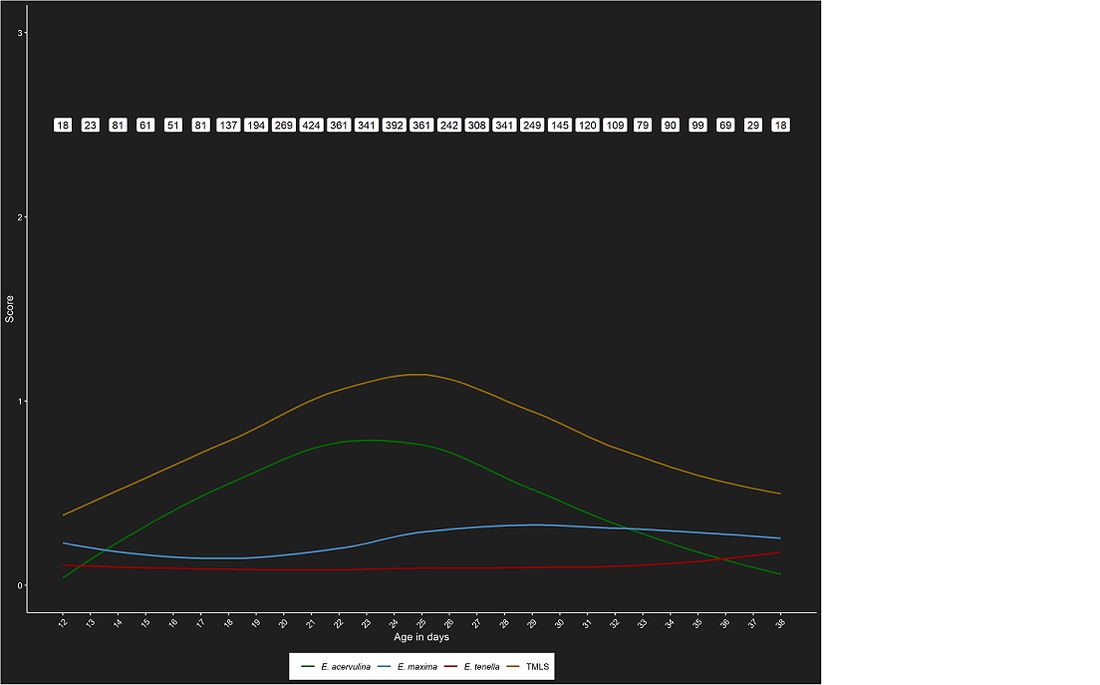 Monimax® is a new anticoccidial product registered for use in Europe. The combination of nicarbazin and monensin results in a product with proven efficacy due to the synergistic effect of the two active compounds.

Monimax® has proven to significantly improve zootechnical and parasitological parameters in an extensive study including data from 27 standardized sensitivity trials. The birds that received Monimax® showed improvements in comparison to birds receiving the nicarbazin/narasin combination product due to significantly better control of E. acervulina and E. maxima. From a practical point of view, this is especially important as E. acervulina is the most prevalent Eimeria species in Europe.

Registration Of A New Anticoccidial in Europe