Improving the Outcome of Antimicrobial Treatment

In swine production the use of antibiotics is an integral part of a swine health plan. For each farm unit, a health plan is designed and includes health monitoring, disease diagnosis, disease prevention and disease treatment measures.

The most common and important enteric infections in the ileum and colon are the following:

When pigs are challenged by PPE, SD or PCS the most important consideration must be to quickly control the disease with an appropriate treatment. Different antibiotics are licensed for therapeutic use against Lawsonia and Brachyspira infections in pigs.

No suitable protective vaccines against B. hyodysenteriae and B. pilosicoli are available commercially. In the case of L. intracellularis, currently an inactivated Lawsonia vaccine and a live attenuated vaccine can be used for PPE prevention.

Responsible use of antibiotics and AMR

Sustaining antibiotic efficacy in the long term is critical and demands the responsible use of antibiotic therapies. The targeted use of antibiotics aims to limit the development and the expansion of antimicrobial resistance (AMR).

The animal health and production industries play a significant role in minimising AMR risk. Following internationally endorsed recommendations summarised in the '5Ds' of antibiotic stewardship is the basis for AMR minimisation.

Selecting the best antibiotic depends on the therapeutically effective concentrations that the antibiotic achieves at the gut infection site and the susceptibility of L. intracellularis / B. hyodysenteriae / B. pilosicoli strains to the antibiotics registered. Use of a drug with broader spectrum can be beneficial based on different bacteria organisms possibly present in the ileum and colon based on polymicrobial infections.

When selecting the appropriate type of antibiotics for PPE, SD or PCS treatment, it is vital to look at two different antibiotic characteristics, both of which are essential for treatment justification. They must have:

Sensitivity tests with B. hyodysenteriae strains are conducted routinely worldwide in several institutes with experience in Brachyspira culturing, isolation and MIC testing. In Table 2, results of MIC investigations on the use of broth microdilution method (one study use of agar dilution) are summarised. In the majority of the countries, low MIC values and high susceptibility to tiamulin was found. In contrast, most Brachyspira isolates show low susceptibility to lincomycin and tylosin with constantly high MICs. B. hyodysenteriae isolates displayed heterogeneous susceptibility to tylvalosin with moderately high MICs. 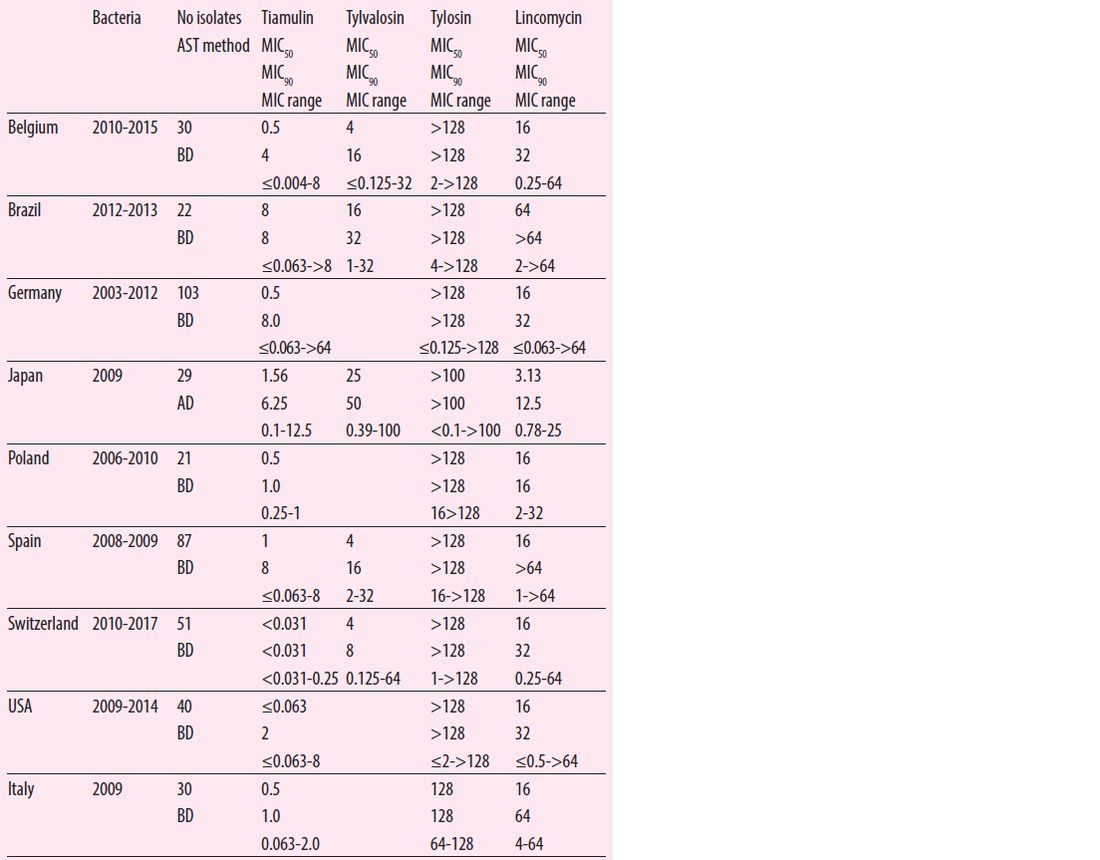 Once the MIC against L. intracellularis and B. hyodysenteriae strains is determined, it is necessary to relate the MIC data to the PK characteristic of the antibiotics. The relation allows vets to assess if effective therapeutic concentrations can be achieved at the ileum and colon infection site. In Table 3, the colon content concentration (CCC) and ileum content concentration (ICC) of different antibiotics achieved after in-feed treatment at registered dose levels is summarised.

PK/PD analysis demonstrates differences between the three drugs and their likely potential to inhibit ileitis infections. A strong treatment effect against ileitis can be expected at ICC of the drug after oral administration at or above the intracellular MICs. This is the case for tiamulin (tiamulin ICC 2-18 times above the MIC) and for tylosin (tylosin ICC 1-125 times above the MIC). In the case of lincomycin, a prediction of the treatment effect cannot be given after oral administration based on much lower lincomycin ICC versus the determined lincomycin MICs.

Susceptibility testing, knowledge of antibiotic pharmcokinetics and targeted use of antibiotics are effective tools to limit development and expansion of AMR. Antibiotic drug PK/PD profiles help to identify the best dosing regimes for enteric infection treatments. These PK/PD concepts are the basis for therapeutic success, for distinct reduction of B. hydysenteriae and L. intracellularis levels to avoid SD/PPE reinfections in the next production phases and for dose optimisation which helps to prevent therapeutic failures.

This article originally appeared in Pig Progress Vol 36 No 3.

Tylovet® is our tylosin product. Typically supplied as a phosphate for use in premixes, a tartrate for water solubles and a base for the injectable form.

Treating E. coli in the Era of Prudent Use

Clostridium butyricum in the Field: Securing Gut Health at Weaning