Due to the wide range of different feed raw materials used to formulate diets, animals are frequently under nutritional stress, and feed additives with a clear role in health and nutrition, such as enzymes, are key tools to achieve optimal animal performance and cost-effective production.

The selection of the right NSPase will bring high economic return via increased zootechnical performance or via reduced feed costs (by feed reformulation).

The use of NSPases in pig nutrition is still under some discussion, but the amount of published data supporting its beneficial effect in pig productivity cannot be over-looked.

Not all NSPases are the same

Although different NSPases may hydrolyse the same substrate (arabinoxylan), there are differences in its substrate selectivity, which results in different in vivo responses. Figures 1 and 2 summarize the results obtained when comparing different NSPases in a growing pig trial. 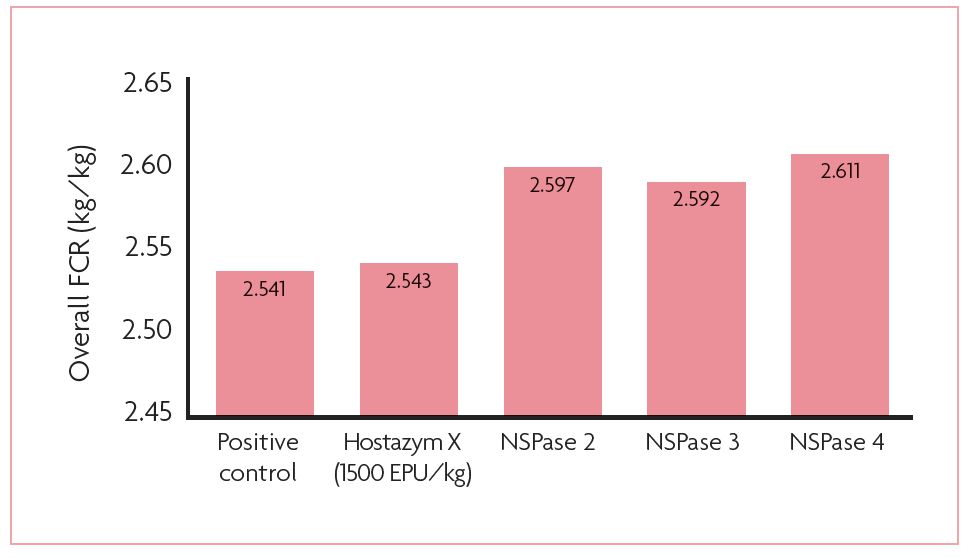 The pig trial was set up at Lovenjoel Zootechnical Center (Belgium), in which a positive control group was compared with four different enzyme treatments. Each enzyme product (all NSPases xylanase based) was added to an energy-reduced diet (-55 kcal NE/kg) following the manufacturer's recommendations. Diets were wheat, corn or soybean meal based.

The different response between products demonstrates that different NSPases have different efficacy rates in degrading its substrate, thus releasing more or fewer nutrients and energy to be used by the animal, and in influencing the digestive process (viscosity, transit time, microflora) with a positive result in zootechnical performance.

Several factors may explain the variation in results as animal health status, gut microflora, production conditions, soluble and insoluble NSP content in the diet etc will all play a role.

Nevertheless, each NSPase will influence the digestive processes differently by increasing digestibility of NSP in the small intestine and by formation of a specific combination of oligosaccharides, which will be available for fermentation by the microbial gut flora in the large intestine. These newly formed fermentable oligosaccharides are as variable as the fibre structure present in the feed, and depend on the exogenous NSPase being used.

The positive effect of Hostazym® X (an enzymatic complex targeting fibre degradation) on pig performance is explained by its influence on nutrient digestibility, on the gut microflora and on the promotion of positive fermentation processes, which lead to an additional energy uptake by the pig, contributing to better zootechnical performance and production efficiency.

Hostazym® X has proved to be a nutritional tool of high added value in pig production, with consistent results in improving pig performance and supporting a healthier gut environment.